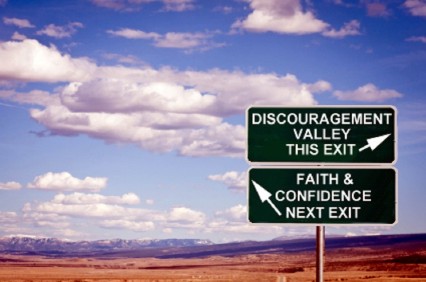 “The greatest enemy of service is that detachment that comes from constant discouragement, that weariness of soul and emotions that causes you to think, “What’s the use? What does it all mean?” When you wonder what it means, turn to those things that comfort and heal you. And we would have some suggestions there, for there are some sturdy friends that you have, not just in spirit, but in the world around you. Your greatest companion, the one who loves you without stint, lies directly out your window. Mother Earth, the world of nature, first and second density, loves you without stint and knows no other way to be. For [first and second density] are not behind the veil as are you. They are aware of the Creator and the oneness of all things and they dance with all things including you. When there is despair and discouragement lurking within you, cast yourself upon the bosom of Mother Earth. She can take all the negativity that you feel and she can heal it by her sanity and her perspective.”
-The Daily Q’uote 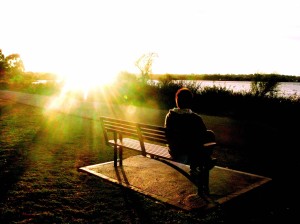 “There is a function of your spiritual evolution which it is impossible to fulfill unless you are to a significant extent empty instead of full, and doing nothing instead of keeping all the balls in the air. Have you ever wondered why there are so many of your people who have turned to solitude, fasting and silence as means of spiritual growth? They are attempting to empty themselves, that there may be room in their lives for the fulfillment of the spiritual function of polarizing by turning the attention to the search for the perception of the infinite Creator.” 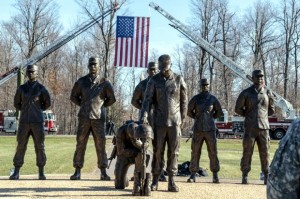 An eerie feeling comes over me

A headstone naming a fallen brother

Families mourned the loss of sons

Each time by chance I see

Too young they all have died

And their fellow warriors cried

Thousands more fell in those places

Families mourned the loss of sons

A family mourns the loss of a daughter

While praying for wars to cease

A chorus of voices from the fallen whispers

“What value has freedom without peace?”

I will pen no poems about grieving parents

I pray to see a happier time

And I hope not far away

Because no warriors fell today

Be Now… not yesterday Past… Now

The One that seed the darkness of endless possibilities

Watch them and marvel of your I AM-ness. 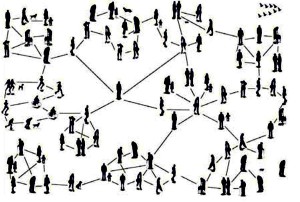 Part of the Computing fundamentals glossary:

Six degrees of separation is the theory that anyone on the planet can be connected to any other person on the planet through a chain of acquaintances that has no more than five intermediaries. The theory was first proposed in 1929 by the Hungarian writer Frigyes Karinthy in a short story called “Chains.”

In the 1950’s, Ithiel de Sola Pool (MIT) and Manfred Kochen (IBM) set out to prove the theory mathematically. Although they were able to phrase the question (given a set N of people, what is the probability that each member of N is connected to another member via k_1, k_2, k_3…k_n links?), after twenty years they were still unable to solve the problem to their own satisfaction. In 1967, American sociologist Stanley Milgram devised a new way to test the theory, which he called “the small-world problem.” He randomly selected people in the mid-West to send packages to a stranger located in Massachusetts. The senders knew the recipient’s name, occupation, and general location. They were instructed to send the package to a person they knew on a first-name basis who they thought was most likely, out of all their friends, to know the target personally. That person would do the same, and so on, until the package was personally delivered to its target recipient.

Although the participants expected the chain to include at least a hundred intermediaries, it only took (on average) between five and seven intermediaries to get each package delivered. Milgram’s findings were published in Psychology Today and inspired the phrase “six degrees of separation.” Playwright John Guare popularized the phrase when he chose it as the title for his 1990 play of the same name. Although Milgram’s findings were discounted after it was discovered that he based his conclusion on a very small number of packages, six degrees of separation became an accepted notion in pop culture after Brett C. Tjaden published a computer game on the University of Virginia’s Web site based on the small-world problem. Tjaden used the Internet Movie Database (IMDB) to document connections between different actors. Time Magazine called his site, The Oracle of Bacon at Virginia, one of the “Ten Best Web Sites of 1996.”

In 2001, Duncan Watts, a professor at Columbia University, continued his own earlier research into the phenomenon and recreated Milgram’s experiment on the Internet. Watts used an e-mail message as the “package” that needed to be delivered, and surprisingly, after reviewing the data collected by 48,000 senders and 19 targets (in 157 countries), Watts found that the average number of intermediaries was indeed, six. Watts’ research, and the advent of the computer age, has opened up new areas of inquiry related to six degrees of separation in diverse areas of network theory such as as power grid analysis, disease transmission, graph theory, corporate communication, and computer circuitry.

A site called Six Degrees, launched in 1997, is considered to be the first social networking site and the precursor of sites like Facebook and Twitter which have effectively lowered the number of intermediaries in the chain, arguably to almost zero.

Based upon a Hindu legend, the story is
called “The Secret Place”.

Once upon a time, very long ago; yes, before man was man, before
trees were trees and before animals were animals, the Gods were
gathered at the council table. All of the Universal Laws were in motion
and the Universal Truths had all been spoken. Still the council lingered
and pondered one thought. All were in agreement that it should be
kept secret, but where to hide it? To just place it out in the open could
provoke many problems. If it were too accessible, no strength would be
gained in the search. If it were hidden where there could be no hint of
it, they might stop searching for it. So, the Gods thought and pondered,
trying to think of the perfect place to place it.

Then Brahma the Creator spoke, for he had been silent for some
time, and the Voice was like a choir, the blending of many tones yet
each one distinct. All the lesser Gods became silent and attentive with
their thoughts, waiting expectantly for the thrill and joy of hearing the
sound.

“Then why is so difficult to find the hidden place,” asked the
Creator, “if we are in agreement in all these things?”

The thrill of listening became overpowering that tears flowed
freely from the lesser Gods bringing the first rains upon
the earth. Water collected into the seas, threatening to
cover all the land. “Stop crying,” said the Creator, “your emotions
must be controlled, directed not repressed. I will have to draw some
of the tears into the sky with heat. Man must have a place to
experience. Where will he gain his knowledge? Where can he use
his knowledge to gain wisdom in order to find it?”

The God of Earth said, “I know, we can hide it deep within the
earth, then Man will have to dig deep and long to find it.”
The Creator reflected upon this, then spoke softly saying,
“If we hide it to deep within the earth, the first man will not
have the tools to reach it. With what shall he search?” Again
there was silence and the earth brought forth seeds.

The God of Water gained the attention of the others and said,
“What about the depths of the seas as a good hiding place? There
can be contractions and it will shrink making it little and hard
to find.” Heads shook in disagreement and they observed the new
life taking form in the oceans.

The God of Fire said, “Let us build a great ever-burning fire that
will never need kindling nor will ever burnt out. In the fire it will
expand to such enormous size, Man will have a hard time recognizing it,
being so big and obvious!”

“No,” said the others, “for in the beginning before it expanded
great and big, it would be too easy to recognize. Then there would be
no need to search and wisdom would not be gained from the experiences.”

Then, the God of Air said, “The most perfect place is in the sky.
Man will gain strength in chasing after it, for it will continually be moving
in motion!”

“No,” said the Creator, “Man needs to be in contact with it, in
order to know that it does exist and is available if only he seeks.” And,
they all observed the animal standing upright and looking at his hands.
“We must decide, soon, for Man’s time is growing near,” spoke the
Creator in a voice of concern. “My joy and the approval of his progress
wells up within me. The hiding place, the secret place, must now be
decided upon or Man may not know we are all one.”

From a place that most all had forgotten came a voice that was
familiar but had waited patiently, for even with the Gods experience
was necessary. “Why not place it within,” said the God of Love. “Man
will always be in contact with it and it will stay the same, moving when
he moves, neither contracting nor expanding, with room to grow. Out
of his sight, yet within his reach. All he need do is quiet the mind and
know.”

“It will take him some time,” said the God of Truth.
“Yet time does not exist,” added the God of Spirit. “It will always
be there at any stage of his progression.”

“He has free will,” added the Creator. “Let him recognize it as he
chooses.”

“Yes!” added the God of Wisdom. “Because, I Am, and neither either,
yet both, let us place the Godhead within the Man.”

And so it has always been that the Godhead awaits the rare
thinker who can be still and know that I AM God.

I will tell you that Imagination will do nothing for us, nothing
that we wish, until we have assumed the wish fulfilled. It will
do nothing until we have assumed the wish fulfilled; and
Imagination is Christ. And so, if I now give up my present
concept of myself and dare to assume that I am the man that I
want to be, have I not died to my former state? And that was the
shedding of blood; that is the shedding of blood on the
psychological state. I don’t go out and buy a turtle dove,
or buy a bullock, or kill some little animal in this world in the
hope of appeasing God. I shed the blood of Christ, and the blood
of Christ is my own wonderful human Imagination; for God became
man that man may become God. He actually became us!

– NEVILLE GODDARD
“Imagining and the Transformation of Man”
1964 Lectures

Follow The Hermit Sage of the Seven Paths on WordPress.com

How Inner-source guide Me to Full Mastery of My Soul Destiny!

AND THEIR INTERDIMENSIONAL CONNECTION

Letters from the Edge of Elfland

How Inner-source guide Me to Full Mastery of My Soul Destiny!

Daily Thoughts and Meditations as we journey together with our Lord.

The Paths of the Spirit

Create a path of Light with your Life

I can write human words

Author of A Journal for Damned Lovers & X and I: A Novel

I write about Passion. Sex. Love. Pain. Darkness. All of it.

Travel into the Rhythm of Color

Exploration of the Sacred & Conscious; including Sexuality

The Hermit Sage of the Seven Paths
Blog at WordPress.com.